The long Road back to the Top 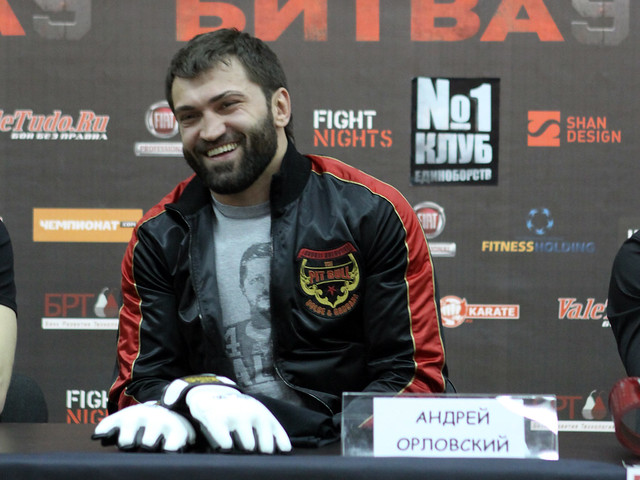 In this Ascension Day edition of my “Tales from the Vault”, I tell you a little story how I played a (small) role in reviving the career of one of Europe’s greatest heavyweight champions.

Like most kids born in the 80ies, I grew up watching Belarusian sambist Andrei Arlovski compete in the UFC in the “dark ages” of the sport. The first fight I really noticed him in was his three-round war with Ricco Rodriguez in the third event under the new Zuffa ownership. Andrei went on to win the UFC Heavyweight Championship and go on to have a fierce rivalry with Tim Sylvia. He also beat the current champion Fabricio Werdum and knocked out Ben Rothwell and Roy Nelson in further high-profile fights.

After years of progress and success, the “Pitbull” train came to a screeching halt at the turn of the decade when he suffered heavy defeats in four consecutive bouts, three of them by knockout. Even though the competition was stiff and prominent (Fedor Emelianenko, Brett Rogers, Antonio Silva and Sergei Kharitonov), at the end of the day on paper were four straight losses and the general consensus within the MMA universe was that Arlovski was “done” and “no longer had it”.

That was the time when he made some trend-setting changes in his life like joining JacksonWink MMA and training under arguably one of the greatest coaches of all time, Greg Jackson. It was also around the time that the “Fight Nights” promotion in Russia started to gather speed and started putting on some pretty exciting fights with future UFC talent like Ali Bagautinov, Zubaira Tukhugov and Gasan Umalatov.

I was interested in that and at the time I was still covering the sport for Sherdog.com on the side, so I reached out to promoter Kamil Gadzhiev to see whether it was possible to cover their next event, “Battle of Moscow 9” in December of 2012. Not only was Kamil excited about the idea, he also asked me whether I had an idea for an opponent for Arlovski. I was surprised at first, because Andrei had since rebounded from his weak phase due to the work of Greg Jackson and headlined events again for the fledgling ProElite and World Series of Fighting promotions.

I didn’t have to think long and I suggested Bellator MMA veteran Mike Hayes. Mike had just lost the Cage Warriors heavyweight title, but had beaten a few good opponents before and was slowly hitting his prime as an athlete. He went on to have a good fight with Andrei, but it was Arlovski who won his first fight back in Russia in over twelve years. In the time that followed, I went to Moscow often and had a lot of fighters competing for Fight Nights.

It was before Gregor Herb’s bout with eventual UFC veteran Gasan Umalatov at Battle of Moscow 12 (which was an insanely stacked card looking back at it now, some of the fighters that competed on it read like a “who is who” of European MMA – Joanna Jedrzejczyk, Albert Tumenov and Jiri Prochazka just to name a few) when Kamil, Andrei and I were sitting at the dinner table discussing Andrei’s future (I was having the traditional vodka with zakuski, while Andrei was preferring cognac, because, as we all know, it’s better for your health).

Andrei told me he wanted to make another run at the big show and as a final argument to drive home his application, he wanted to headline a big event in his home country of Belarus. Again they were looking for an opponent with good name value. I suggested Greek-German heavyweight Andreas Kraniotakes. I was managing “Big Daddy” from 2009-2013 and had gotten him some pretty high-profile fights against Nandor Guelmino, Tim Sylvia and Mike Hayes. Kamil and Andrei liked the idea and we did the fight.

In a co-promotion with Belarusian Fighting Championship, Arlovski and Krantiotakes filled Minsk Arena and had a varied and entertaining fight. Andrei surprised Kraniotakes with a grappling-based approach and ended up knocking him out midway through the second round. The rest is history: Arlovski re-signed with the UFC and had a remarkable run in the late autumn of his career that carried him all the way to a title eliminator for the heavyweight belt at the beginning of this year.