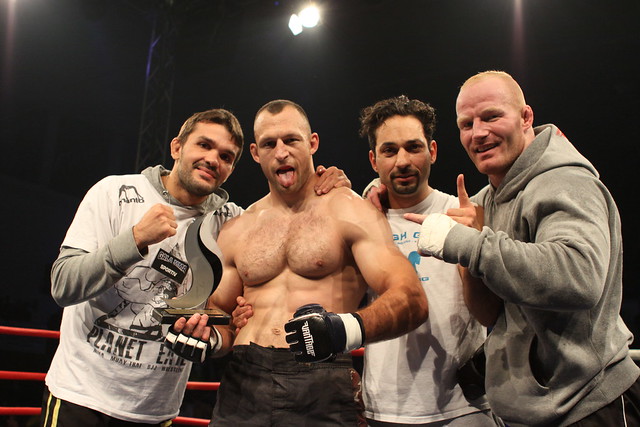 My flight to Zurich is delayed by one hour, so I can take the time to tell another story from the vault: Last time we were in Poland for a country-versus-country battle and one year later we went to Transylvania to do battle with a team from Romania. Around the turn of the last decade, these comparisons between nations where hugely “en vogue” and whenever a foreign promoter was looking for a German team, most of the time I was the one to select the “players” – a MMA version of Jogi Löw so to speak.

While the team composition varied greatly over the years with many fighters dropping in and out of the squad for performance fluctuations, a lack of professionalism or injury, there was one fighter I was always able to rely on and who came as close to a “guaranteed win” for our team as possible: Gregor Herb. At five-foot-eleven and a ripped 200 pounds, this German heavy tank was equipped with explosive takedowns, a stifling top game and powerful submissions. Fighting a prime Herb was no joke.

Already 3-0 at the time after successful battles against the Turks, Russians and Poles, Gregor was given the task to eliminate Romania’s strongest fighter, Ion Pascu. Although at a serious disadvantage to Gregor when it came to battle experience, we had scouted the Bucharest native to be a violent human being who went after the opponent’s carotid aggressively and who had a lot of power in his hands. He was also five years younger and significantly faster than the German Bulldozer.

When fighting for his mother country, Herb always rose to the occasion and managed to overcome difficult situations. This time it was no different. Watch the short clip of the fight to see a classic striker versus grappler confrontation and a strong comeback of a fighter who appears to have huge difficulties with his opponent, but remains persistent and follows through by executing his gameplan perfectly. There’s also cameo’s from young Peter Sobotta, Human Nikmaslak and Mathias Schuck in this clip. Have fun!