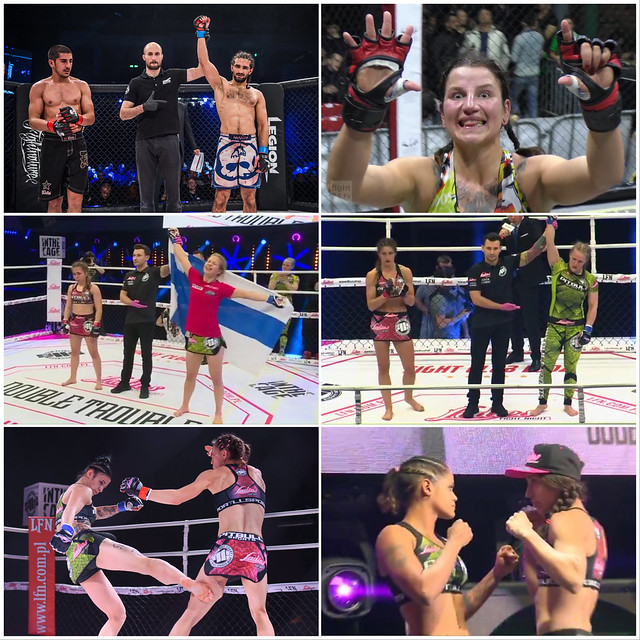 Disclaimer: This is going to be (another) rather extensive (W)-MMA-related rant, so if you are on the internet for cat videos and Christmas cookie recipes, this is not for you.

Last weekend, I attended my first-ever female-only martial arts event, Poland’s Ladies Fight Night. I am in no way an early adopter or a pioneer when it comes to women’s competition, but I have organized fights for my various girls for the last eight years and have had girls compete on some of the biggest stages like the UFC, RIZIN, Cage Warriors and Invicta.

After having been in talks with LFN’s matchmaker for close to two years and missing out on the first six of their events, I was happy to make up for that and get four of my girls on the two cards for their Friday and Saturday two-year anniversary double event, aptly titled “Double Trouble”.

Cristina Stanciu was headlining Friday’s event against Czech Republic’s Magdalena Sormova, while Maguy Berchel was in Saturday’s main event versus Venezuela’s Carolina Jimenez. The 2015 IMMAF Amateur World Champion Minna Grusander opened LFN 8 against RIZIN veteran Hanna Gujwan and Strikeforce veteran Maiju Suotama was the last person to be added to the event as she filled in on four days’ notice against Taekwondo world champion and local heroine Katarzyna Sadura.

Cristina had joined Peter Sobotta’s Planet Eater team from Romania this summer and was looking to rebound from a pair of losses she suffered in the UFC last year. Unfortunately, due to a miscalculated weight cut that took a lot of energy out of her as well as the struggle to switch from her old reckless style to a more methodical and strategic approach, she eventually got armbarred at the end of the first round after previously dominating the standup.

The young Romanian has a lot of work on her hands next year, but still only being 23 years young and having tons of raw athletic potential at her disposal and Germany’s best team by her side, I am not worried that she will very soon break out from this slump and have many stellar performances.

Minna was up first on Saturday and what can you say about this little Finnish tornado other than she put on another very dominating performance. Her opponent, Hanna Gujwan, is a Polish kickboxing champion and gave Japanese superstar Rena a real run for her money in her fight on New Year’s Eve last year.

Gujwan first seemed surprised and later disheartened as Minna went after her in the standup and actually outboxed her, before taking her down and working her over on the ground. Only the bell was able to save “Tyson” from being stopped with strikes at the end of the first five minutes. It was more of the same in the second stanza and Minna took Gujwan’s back standing before choking her out midway through the second round.

This was the third win for Minna this calendar year and her fifth win at professional level. Overall, she was won nine of her ten fights, finishing seven of her opponents. I firmly believe that she is the #1 female fighter under 50kg in Europe right now and at age 28, she is only entering her prime. Don’t be surprised to see “Brutsku” in a ring or cage outside of Europe in 2018.

The biggest feel-good story of the weekend was Maiju Suotama’s victory over one of Karolina Kowalkiewicz’s main sparring partners in Katarzyna Sadura from the formidable Shark Top Team in Lodz. To understand the magnitude of this win, I have to go a little further afield to explain.

Mai and I have known each other for eight years. She first appeared on my radar when she won the Upcoming Glory flyweight tournament in Holland back in 2010 with the winner going on to compete in a single-night four-women tournament at Strikeforce later that year.

Even though she dropped a unanimous decision to eventual Strikforce and UFC champion Miesha Tate in the semifinals, Maiju established herself as one of Europe’s foremost female prospects with her performance. After three more fights, she stopped competing in MMA at the end of 2011 indefinitely.

Maiju, who had since gotten married to the inimitable Joni Suotama and assumed his name, was one of my very first targets when I started working on the European Fighting Challenge card in Espoo last year. Mai and I talked for well over half a year, but eventually, she wasn’t just ready to come back to the sport of MMA yet.

Somehow our talks seemed to have re-lit that competitive fire under her and after dominating a few ADCC national championships, she eventually returned to MMA this summer, choking out Muay Thai world champion Hatice Ozyurt in the first round. Ever since she has stayed active looking for another opportunity to scrap.

When I told her, there was an opportunity to fight Sadura on Tuesday, she didn’t hesitate and accepted the fight immediately. Not only did Sadura have the advantage of a full camp, the BAMMA veteran also had the home crowd behind her and she was coming off a unanimous decision win over another Finnish fighter in Suvi Salmimies in April, so taking the fight was not without risk. Still, we felt that Maiju would match up very well with her style-wise.

Life threw her another curveball when she learned that a longtime friend and teammate of hers had lost the battle against a terminal illness just minutes before walking out to her fight. Her performance is just even more impressive in view of that.

She turned the fight into a grappling match and dominated Sadura on the mat. After almost choking her out near the end of the first round, Maiju continued that route in the second stanza and forced referee Piotr Michalak to stop the fight with strikes from the mount near the end of the round. It was a true veteran performance that I cannot praise enough. Calm, collected and steady, even with limited energy at her disposal due to the spontaneousness of this combat mission.

I told Mai after the fight that if she can beat one of Europe’s brightest prospects on four days’ notice, I don’t have to think twice about putting her in there with any girl on the planet at 135lbs if she has a three-week or even a full camp. Still only 31 years young and at 8-3 with four straight wins (two knockouts and two submissions), I believe that she has more than earned her chance to prove herself on the big stage in what promises to be an even stronger second half of her career (cc: Mick Maynard, Rich Chou, Shingo Kashiwagi).

Last but not least we had Maguy Berchel competing for the first time in a non-francophone country. Maguy is a fantastic talent, a great all-round fighter and one of the sweetest persons you will ever meet. In the main event of LFN 8, she had the tough job of battling undefeated Venezuelan grappler Carolina Jimenez on a little less than three weeks’ notice.

Maguy started well and often landed nice combinations and kicks in the standup. A mistimed takedown attempt changed the outlook of the match as Jimenez had the upper hand on the ground. In the second round, Maguy continued to have trouble staying out of the Caracas native’s clinch and was repeatedly taken down. Jimenez threatened with submissions, but Berchel defended intelligently.

In the final round, Maguy tried to go for broke as she knew she needed the knockout to win the fight, but after battling with a larger opponent and having to defend a lot of attacks on the ground, she just didn’t have the energy to land the fight-ending shot and dropped the first decision of her career.

With some minor adjustments and perhaps in a different weight class, I believe the future looks very bright for this very exciting Parisian!

Overall I have to say I have been very impressed by what the LFN staff has achieved in only two years’ time. Granted, there was some crunching and scrunching in the leadup to the events and there are some set screws that still require some fine-tuning, but overall we felt very welcome, the venues were spectacular and the shows very tight and well-produced. Last but not least all fighters brought it, but that doesn’t surprise me as I haven’t seen a bad women’s MMA fight in my life.

Elsewhere, Germany’s number one female fighter Katharina Lehner improved her perfect undefeated record to 7-0 with a clear unanimous decision over Australian export Gemma Pike. Kati battered the seasoned Muay Thai stylist in the standup, landing nice combinations in each of the three rounds. Pike’s only answer was to try and wall and stall, but even that refuge wasn’t safe as the Cologne native landed a barrage of knees every time they clinched up.

With two wins from two fights including her US debut this summer and two more excellent training camps from fights that were eventually canceled, Katharina managed to live up to her outstanding 2015 campaign after a forgettable injury-ridden 2016. I am very excited to see what 2018 has in store for her!

The only male fighter competing for us this weekend won in style as well: Planet Eater’s Mert Özyildirim did everything but finish his opponent Can Aslaner in what was one of the most lopsided decisions in recent memory. From the opening bell, Mert took down the jiu-jitsu expert and absolutely manhandled – or should I say Merthandled – him on the ground.

Aslaner at no time during the fifteen-minute fight had any answer to Mert’s relentless attack, wrestling, power, top control and pressure. Bloodied and beaten, he had to accept defeat for the first time in his career, while Mert improves to a perfect 7-0. I will gladly put five Euros into the buzzword piggy bank by saying that “sky is the limit” for this 24-year-old.

This was the penultimate fight weekend for me last year. Next week we will head back to Japan for the RIZIN Fighting Championship Bantamweight Grand Prix 2nd Round. So long!