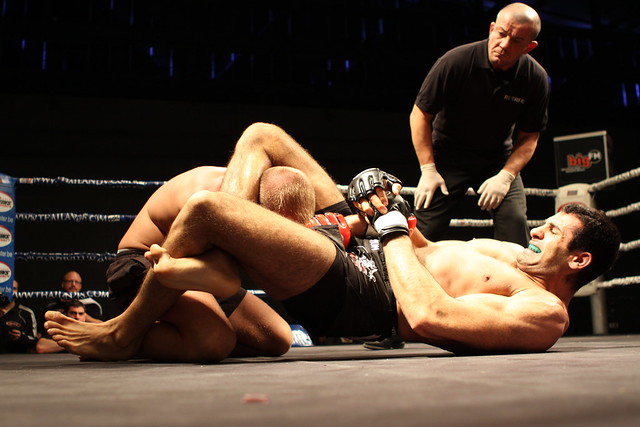 In the next episode of my weekly “Tales from the Vault” series, the time is winter of 2011 and we are in Göppingen in the Swabian Mountains (just outside of Stuttgart, Germany). Promoter Sam Radi had entrusted me with the task of doing a four-man single-night super lightweight tournament with international participants. The event also marked the return of Stuttgart’s most beloved son Alan Omer after years of international fights in Eastern Europe and the UK.

The absolute show stealer was a battle between two young light heavyweights as Marco Knöbel from the fledgling Planet Eater team in Balingen was taking on Miodrag Barisic, fighting out of Seiwasser Martial Arts. “Miki” had already competed twice and had the reputation of being a fierce slugger, while Marco, who heads up the successful MFFC-Kampfsportschule in Donaueschingen and who had celebrated a few spots on the podium in BJJ and NoGi competition, was making his MMA debut.

I don’t want to anticipate the outcome of the fight, I will just say so much: It was a real war of attrition with no man backing down and both fighters leaving their last ounce of energy in the ring. The fight was rightfully nominated as “Fight of the Year” by leading German martial arts website GnP1.de that year.

The underlying storyline that’s truly remarkable here is that night, Peter Sobotta and Coach Yasin “Seiwasser” were in opposite corners, coaching against each other. Fast forward to three years later and Yasin is now one of the integral components of Planet Eater as the team’s head striking coach and one of the driving forces behind Peter’s much-improved second UFC run. Solid proof that excellence and good people attract each other.

Marco, meanwhile, has grown into one of the most dangerous combat sport athletes in the light heavyweight division in Germany. He has gone on to dominate the mats in German grappling tournaments and led the team to the German Championship in 2014. Most recently, he knocked out previously undefeated prospect Sebastian Heil to become the number one contender for the Respect Fighting Championship light heavyweight title.